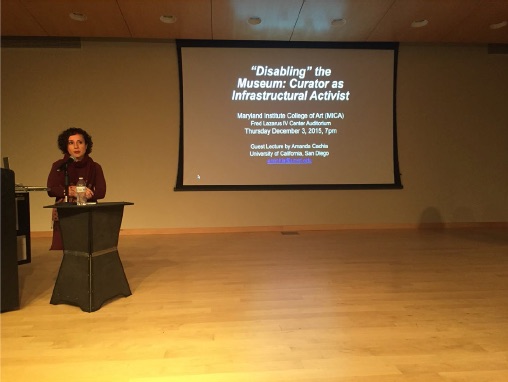 “The Alterpodium: A Performative Design and Disability Intervention,” Design and Culture: The Journal of the Design Studies Forum, Vol. 8, No. 3, Fall 2016

The Alterpodium is a custom-made, portable disability object that I use to “perform disability” during international and national conferences, symposiums and lectures. As a person with a rare form of dwarfism, entitled brachyolmia, podiums, like other architectures of this ableist world, are often inaccessible to my 4’3″ stature. Thus, Alterpodium critiques objects within the built environment that have only one body type and size in mind. While most architectural accommodations for atypical bodies are created for seamless, even invisible integration, the Alterpodium amplifies its structural workings, elongating and emphasizing the user’s opportunity to create an alternate, provisional world in public. The Alterpodium thus attempts to claim spatial agency over a public environment that commonly serves ostensibly normative bodies. Through the performance of this custom-made object, where boilerplate design is re-imagined and re-built, I also offer the audience member the opportunity to re-think the ways their own bodies engage with objects in public space. The space of disability animated through Alterpodium is one that sets an important new agenda within contemporary art, architecture and critical design practices.