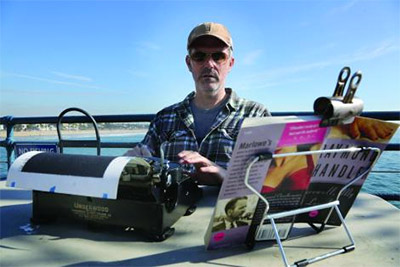 In Tim Youd’s recent solo exhibition and performance, The Long Goodbye, at the Museum of Contemporary Art in San Diego, visitors were able to hear the artist’s work before seeing it. It is a sound that most people will be familiar with, but haven’t encountered in a while. As one approached the museum’s Krichman Gallery, the staccato sound of the clacking keys of an Olivetti Studio 44 typewriter was audible before rounding the corner to take in the sparkling view of La Jolla Cove through the room’s generously sized glass windows. I have always admired the beach location of this gallery, and Youd was able to enjoy it for four weeks in the month of July as part of his durational performance, where he sat at a desk and retyped Raymond Chandler’s Philip Marlowe crime novel, The Long Goodbye (1953), the sixth book in the seven-volume series. An acclaimed detective-fiction writer, Chandler moved to La Jolla in 1946 with his wife, Cissy, settling down the street from the museum on Camino de la Costa. Chandler wrote The Long Goodbye in this location, as well as the novel Playback (1958), which is set in a fictionalized La Jolla. Thus, Youd was not only retyping Chandler’s novel with a spectacular Southern California ocean vista as backdrop, but he was also reconstructing and possibly reliving the experience that Chandler may himself have witnessed as he wrote the novel.