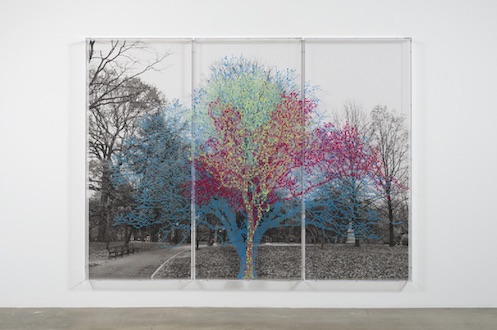 Many who are familiar with the work of Conceptualist Charles Gaines will recognize here the sequence of grids and numbers from his “Numbers and Trees: Central Park Series II,” 2015–16. The artist’s commitment to his system-based methodology for critiquing clichés of artistic impulse is seen in eight large-scale black-and-white photographs of Central Park, overlaid with acrylic Plexiglas boxes: Paula, Elmore, Susanne, Steve, Lucas, Laurel, all 2015, and Fredrick and Amelia, both 2016, which are exhibited alongside eight smaller ink-on-paper drawings from the series “Numbers and Trees: Central Park Series I,” 2016.