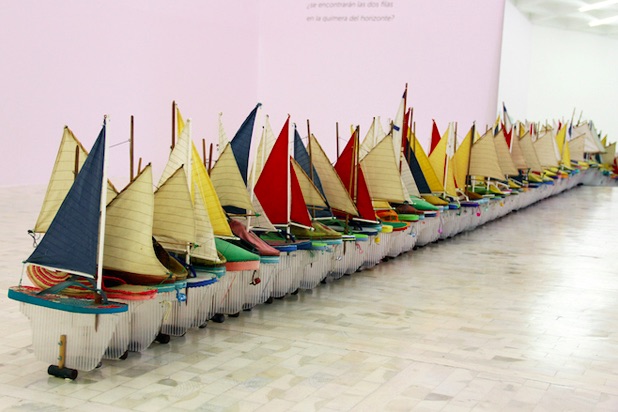 Mexico City-based Belgian artist Francis Alÿs has long been interested in socio-political issues stemming from territory and displacement within marginalized communities, as witnessed through the vestiges of immigration, natural disasters, and warfare. Thus, it is no surprise that these themes feature prominently in three projects in his major solo exhibition, A Story of Negotiation, curated by Cuauhtémoc Medina and beautifully displayed at the Museo Tamayo. Installed in three generously sized white-cube spaces, Don’t Cross the Bridge Before You Get to the River (2008), Tornado(2000–2010), and Reel-Unreel (2011) consist of a symbiotic relationship between the artist’s chosen mediums of film and painting. Alÿs’s socially engaged art practice and dialogic negotiations with minority groups lead him to embark on journeys through various cities, captured on film.