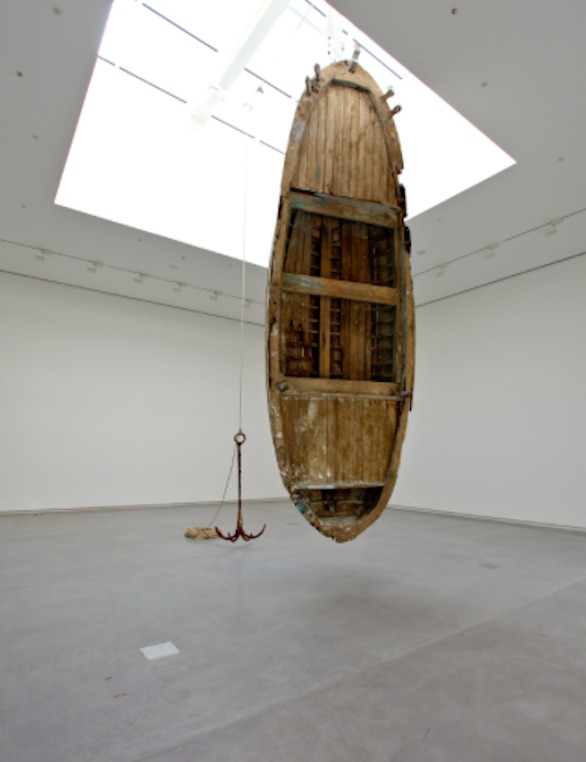 The subtitle for the twelfth edition of the Sharjah Biennial—“the past, the present, the possible”—is a term that curator Eungie Joo took from an essay by the French philosopher Henri Lefebvre, who wrote about the concept of the right to the city, calling city dwellers to action in collectively shaping their urban environments. Within the context of Joo’s biennial, the title was deployed to address the role of contemporary art—how art is a vehicle to freely express the intangible through tangible form. Enter Steel Rings (2013) by Rayyane Tabet. On the ground floor of the Sharjah Art Museum, I encountered this simple yet powerful steel sculpture. Rolled slabs of engraved steel imitating the shape and form of a spinal column dominated the hallway of an entire wing of the museum, while the small white cube gallery rooms on either side of the sculpture remained evocatively vacant. The piece replicated a portion of an abandoned 754-mile long Trans-Arabian pipeline, originally established in 1946, which snaked across Saudi Arabia, Lebanon, Jordan, and Syria, uniting the countries in a constellation of history, geography, and geometry. Tabet recreated the pipeline down to the thickness and diameter of the rings, and he engraved each ring with its original geographic coordinates.